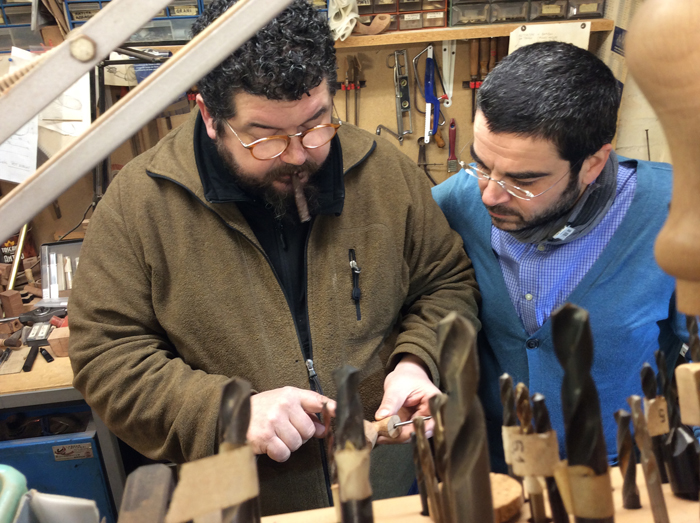 Gabriele is what you call an all-around craftsman. If you need technical advice, no other could give you better information, going from electro engineering to carpentry, from mechanics to laser engraving, always mastering the subject and with abundance of details.

That’s because nature gave him in profusion one of the characteristics of a good craftsman: do things for the pleasure of doing them well.

Gabriele had already invited me to learn the pipe drilling several years ago, and I had always declined the invitation.

I must admit it was because of my laziness. Why learn a new technique, with all the paraphernalia of new tools it carries with it, when you are already in control of a technique that works?

Then, one day I made up my mind, pushed by Manù who, on the contrary, was eager to learn the hand drilling. Can you think about the freedom of action this technique might give? – he used to tell me on the phone – Nothing can limit your imagination because the drilling is the final stage.

He was right and I knew it.

So, one winter day in 2019 I found myself knocking at the door of my friend Gabriele in Monteveglio, a place in Valsamoggia a few kilometres from Bologna.

We will have been together for a few days, Manù, Massimo Damini, the Dal Fiume family – Petra, Sofia and Gabriele – and I. In the lab during the day, first following Gabriele’s skilled hands drilling a pipe by hand, then trying by ourselves the just learned technique. Wandering around local trattorias in the evening to enjoy the local culinary wonders. Because, if you didn’t’ know, Gabriele is also an amazing cook and refined palate.

After this experience I suggest everyone not to stop at drilling on lathe or with drill press. The hand-made drilling is an extra gun, and you need to know how to use it.

But be careful and don’t become a diehard fan of one or the other technique, just be aware that knowing both is fundamental to be a complete craftsman.