Of Earth, Fire and Air 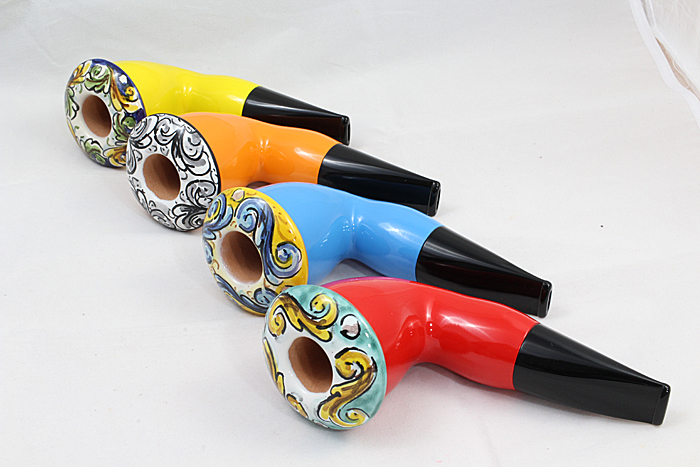 The idea of putting these three elements together to make a pipe with a strong Sicilian identity, came up in front of glass of wine. For some time, Carlo Riggio, a famous tobacconist in Palermo. Had been thinking about a pipe that could become the one hundred years’ symbol of his tobacco shop and, at the same time, express his feelings towards the pipe and the island where he was born.

Between one sip of Nero d’Avola and the other, he asked me if I felt like transforming the idea into a project.It will be my pleasure – answered I, and so the adventure started.

For months, to each project followed a prototype I realised in my workshop, Carlo’s testing, tips on new changes to be made, a new prototype and a new testing.

The first series productions showed other difficulties: a series production pipe must be easily reproduced, and my sketch was quite complex. The problem was simplifying the construction without debasing the original sketch.

Those were months of labour, but we never stopped putting first the pleasure of making.

Now, after a long time, we can eventually say we made it.

In the pipe there’s the EARTH, the heather briar, the ultimate material in the creation of pipes since ever; there’s the FIRE of pottery and ceramic, one of the oldest ways to smoke pipes; but there’s also the AIR, through a modern drilling system, the double calabash, which makes the smoke fresh and dry every time you smoke the pipe.

But it’s not enough, there’s the COLOUR of the Sicilian ceramic coming from the labs of Maestro De Simone’s handicraft company that proposes the oldest traditional drawings and colours, to which a limited edition of pipe bowls in the inimitable company style will soon be added.

Today, The Siciliana is available in assorted colours and finishes and with bowls of briar, pottery and ceramic. The possible combinations are therefore uncountable. Each pipe is sold with a set of bowls of the three materials and it’s possible to buy it at Riggio tobacco store, also online.