When you eventually land at Narita airport, you realise that, despite all the information you collected before your departure, nothing could prepare you to what you are going to find yourself facing:

the alien Japanese world reveals itself for the first time to your eyes, and inside you, western virgin, a sudden feeling of inadequacy arises. And now? – you ask yourself – how can I…?

In a smoking area just outside the airport, the Sauro pipe Company  (my wife and I) was trying to elaborate this unexpected emotional state, when a woman with almond shaped eyes came closer and said: Excuse me, I couldn’t help hearing you. Are you Italian? – Yes – was our surprised answer – And where are you from? – she insisted –From Palermo, in the south of Italy – I answered  – I live right there in Palermo  – concluded she with a smile. Yoshie Yamazaki teaches at the Italian-Japanese Association in Palermo and, thanks to her directions, getting to the hotel was a kids’ game.

This is how we solved our first impact with alien Japan, with an unbelievable stroke of luck. Or, if you wish, a good omen sign.

And actually, the few days at our disposal go by really nicely.

We alternate long rides on the subway looking for places to visit, to lovely walks with our pipemakers friends through the streets of Asakusa, the district where the show is going to take place. 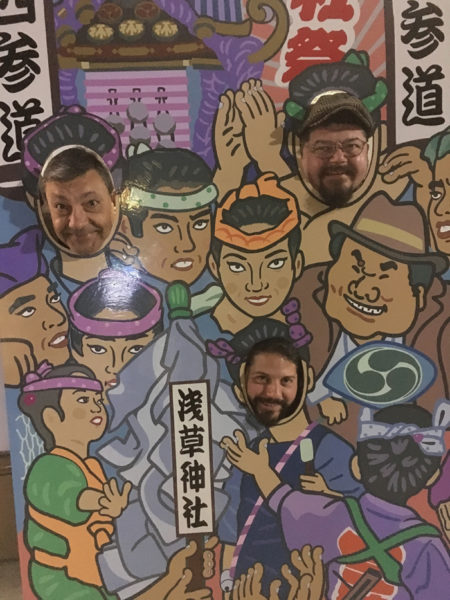 On a morning, invited by Mr. Tsuge, we visit his factory, a milestone in Japanese pipes. He welcomes us in impeccable traditional clothes to leave us then at Hiro, Yo and Kohji’s kind and caring attentions , who will turn out to be perfect hosts.

The show, created by Mr. Tsuge  during the Japanese stage of the XIV° Slow Smoking World Championship, is attended by a small group of established masters, new talents and sellers of evident quality. A hug here, a hand shake there, sometimes just a nod, according to the closeness level that has been reached over the years, after having met each other around the world, conscious, maybe a little proud too, to belong to a restricted entourage that is still keeping alive such a noble and ancient object: the pipe. It doesn’t matter where we are from, we have all the same passion, a piece of wood with two holes, as I often say when I want to be ironic about our category.

The two days of the show are going to be a chance to know better Steffen Mueller and Sabina Santos, to have a word with my unaware, inspiring muse, Manduela, to meet, at last, personally Master Tokutomi. What a pleasure, then, meeting again my old friends Gabriele dal Fiume, Claudio Albieri and an unexpected Karin Romeo.

During the long and sometimes a little boring hours of the show, something bizarre luckily happens every now and then. As on that afternoon when an elderly Japanese man was able to slip away his wife’s watchful gaze and, in just a few seconds, bought a pipe through gestures and unarticulated words, begging  the seller with his eyes to hurry it up.

When he finally put the pipe into his pocket without his wife sensing anything, I was very relieved for him. I hope he enjoys that pipe. 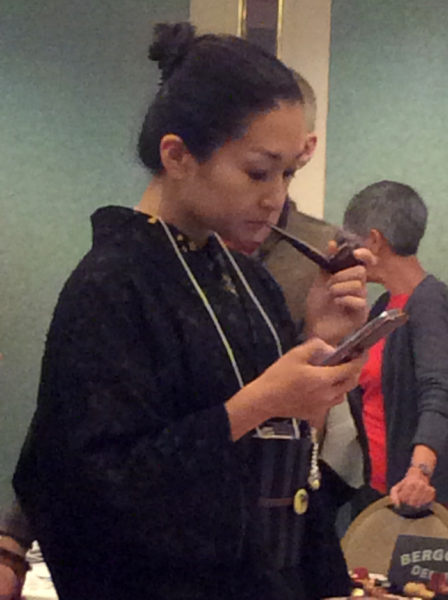 When the show was over, Mr. Tsuge gave us the opportunity to take part in a tour on Mount Fuji. It was an immersion into the dreamlike dimension of Japan: the visit to an ancient village and a herb garden, the sight of the snow-clad volcano top, the purification within the warm waters of Fuji Lake Hotel, a ritual dinner in traditional costumes.

The oneiric dimension of Japan is persisting  inside me even after my return to Italy, giving me dreams I want to tell you, because it’s a shame to withhold such things.

Well, I just happened to dream about Steffen who was wearing two juicy tonkatsu  instead of his five-finger shoes. And then about Gabriele, Claudio and me walking through Asakusa dressed as Samurai, our katana ready to be drawn while we are waiting for the Danish Clan that, led by Kurt and Anne Julie in Viking costumes, want to cut off our heads. Manduela will prevent this epic fight: she will stand between the two factions, talking about universal love. Struck to the heart, all of us will  hug, crying and drinking sake.

But the funniest scene in my dreams was with Lev and Alexey, their inevitable pipes in mouth, talking lively with Dostoevskij, Puskin and Gogol in a tiny coffee-bar of Asakusa. I will never know what they were talking about, in my dream those five are holding talks in Russian, but the mere sight of such a gathering, although just in a dream, is a joy to sore eyes.

Who interrupts the lively discussion among the five is Antoine that, with his natural elegance, asks if the gentlemen would have something to drink. Vodka!  – Mr. Dostoevskij proclaims with no hesitation–  The other four men approve by nodding strongly, although Antoine is trying to convince them that champagne would be more appropriate to the occasion. In fact, beyond them, Sabina is celebrating the end of her stress-caused cold together with Gotoh and Lee. The three of them are nibbling at some green tea pastries and talking about women’s future in the pipes world. Maybe this is why Karen appears to me: she’s taking pictures of some Italians that are singing “Volare”, right in the middle of the big Shibuya crossroad, while Francesca, indifferent to the chaos around her, only has eyes for a huge dish of tempura. She can’t handle this – I say to her husband. That’s just the appetizer  – he answers.

Mr. Tsuge breaks in to put an end to my oneiric nights cicle: Usual Westerners!  – he screams – the show has already begun and nobody is at his place yet!

Escorted by Hiro, Yo and Kohji, our eyes on the ground in shame, we are all led to the hotel and placed at the tables where, however, there aren’t our pipes but emotions in the shape of coloured marbles…

Now, with a little bit of nostalgia, my dreams have got back to being as always had been, and I’m already thinking of new pipes, new journeys and other  encounters, but one thing is certain: I am going to be forever curious to know what were those fantastic five Russians talking about!